Join Date: Aug 2016
Location: West Coast Central Scotland
Posts: 577
Garage
Clampdown on UK car tax dodgers
A nationwide purge with the DLVA and Police checking car numberplates parked on the roadsides to find if they have tax or not is underway right now. Many regions of the UK are getting checked and cars are being clamped.

This also includes Scotland where clamping for parking charges was made illegal a decade ago, to cut down on evil overcharging clampers, so a car clamped in Scotland is an unusual sight. But I saw two in my home town yesterday, clamped, as the DVLA have that power in Scotland also.

Cars will not get un-clamped till they pay all car taxes owed, and also a fine.

Even though the tax disk on windscreens was abolished for on-line electronic payment instead a few years back, i do not know why these owners thought they could get away without paying car tax. Well they are paying now. 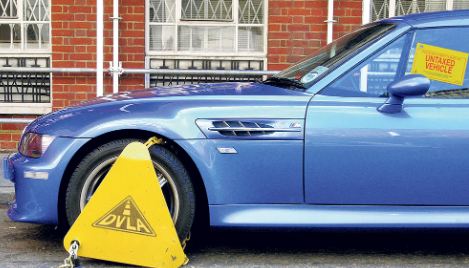 
Join Date: Jun 2018
Posts: 204
I personally think the abolition of the tax disc was a retrograde step. No tax displayed or out of date was often an indication of other document offences. No tax, no MOT no Insurance. It also led to unroadworthy conditions due to the fact a MOT could not be obtained..
Whilst the police can check on their in car gizmos, to see if the documents are in order, they claim they are too busy to do so. It is possible to check if a car is taxed and has an MOT on line but Insurance is more difficult.
Opposite me is a young couple, he is an electrician. Until recently he worked on his own and had a Ford Transit. It was untaxed and no MOT for just under a year. Previous MOT's were either failed or advisories were given for tyres. Yet year on year, it's all there, it was tyres lights etc. His present van is a company one and is overloaded. Yet as he is a good ol guy, no doubt done some private jobs he sails on regardless.he gets a get out of jail card. Cynical yes, why because the tax disc offences were the bread and butter offences that a brand new rookie copper was trained on.
I am fortunate in that I do not pay tax as I am exempt. I received an injury to my back which has turned into rather uncomfortable arthritis and a vertebra pressing on the Femoral nerve to my right leg.
Clamping vehicles wont always work due to non transfer of ownership to the DVLA and so the vehicle will rot at the road side having to be removed at the tax payers expense.
Still it is a step in the right direction after all the greater majority of honest motorists pay up, often with difficulty.
freddyford is offline
Quote
post #3 of 3 (permalink) Old 09-07-19, 06:14 AM Thread Starter
colinJYD
Senior Member

Join Date: Aug 2016
Location: West Coast Central Scotland
Posts: 577
Garage
Here is a car that was DVLA clamped. I see the clamp was left behind, not much else though